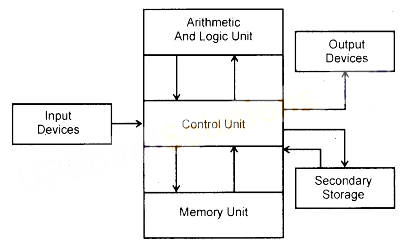 2. Computer Software: Software is a series of instructions that tell the hardware how to perform tasks. Without software, hardware is useless. Hardware needs the instructions provided by the software to process data into information. Computer software can be divided into two parts Le., System software and Application software.

3. Computer User: The person who communicates with a computer or uses the information it generates is called a User. 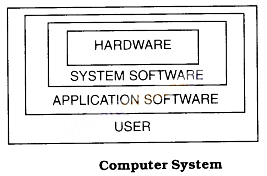 Type int: The data type, which stores numeric data, is one of the basic data types in any programming language. It contains a sequence of one or more digits. For example—int sum. The variable ‘sum’ can store an integer value. It stores non-fractional values and occupies 2 bytes.

Type float: The float data type can be used for storing values containing decimal places. The difference between int and float is only that the int type includes only whole numbers but the float type includes both whole as well as fractional numbers. It occupies 4 bytes.

Question 5.
WAP to create a file in write mode and accept data from the user, and write it on file “student.txt.”
Answer:
Program:

Question 6.
Write a program to take the contents of a text file and copy them into another text file, character by character. (UP 2008, 16)
Answer:
Program:

Classification of Programming Languages: Programming languages can be classified on the basis of generations of computers as follows:

This classification is according to the generic upgradations in the languages as per time. As time passed by, every language made significant improvements and showed some additional features.
Similar kinds of classification of programming languages can be written as following on the basis of characteristics and features of languages.

The above classification is in increasing order of developmental phases of languages too.
Low-Level Language: The languages that were used in the first-generation and early second generation are called as low-level languages. They directly used computer memories and other storage hardware like registers to write programs. These languages were highly hardware dependent or machine-dependent. Programs written for one kind of hardware platform cannot be used on some other machine. Low-level languages are further divided into the following two categories :

1. Machine Language: As the name suggests, it used the data in writing programs which were directly understood by the computer. A computer can only accept and work on electronic signals. These electronic signals are actually a presence or absence of electronic current in a circuit. The presence of a pulse in a circuit is denoted by 1 and absence is symbolised by ‘O’. These are the only two digits which are used by a computer system and they are known as Binary digits (or abbreviated as Bits). A language that uses these two binary digits to write computer program is known as machine language.
A program written in machine language comprises instructions in the form of a series of 1’s and 0’s.
Machine language instruction is divided into two parts:

OpCode: This is the first part of an instruction which tells to the computer, what is to be done or which operation is to be performed.

Operand: This is the second part of a machine language instruction which tells the address and location of data on which operation is to be performed.

Translator: It is a kind of system software which converts a program written in high level language into machine language. This machine language code is actually executed by the computer to achieve results.
Translators can be divided into following two categories and accordingly languages are also classified as either :

1. Interpreter: It is a translator for high level languages. It translates every single instruction linewise and then executes it. This process continues until the end of the program. If it encounters any error, it is informed to the user immediately. Until an error is removed, the interpreter does not proceed in a forward direction. Thus, we can say that every single line of a program (also known as source program) is checked for errors, translated and executed sequentially. Basic is an interpreter based language.

2. Compiler: It is a translator for converting programs written in high level language into machine language. Its major function is the same as that of interpreter but it works differently. It scans the entire program and lists all errors at a time. Until or unless programmer rectifies all errors, program is not translated into machine code. On successful removal of all errors, object code is created. This object code is executed to obtain the desired result. The original program before the compilation process is called a source program.
Some compiler based languages are. ‘C\ C++, JAVA, COBOL, PASCAL, FORTRAN etc.

Fourth Generation Languages (4 GLs): These are a group of languages that made problem solving further easier than what was available in high level languages. High level languages are procedure-oriented languages, le., they focus more on the way of solving a problem. 4 GLs are a category of languages that focus more on the objective of the given problem than on the ways and means to solve it. These languages were designed in view of managing databases (Database is a collection of similar types of records).